How to control the Redox Potential in cooling systems

When chemicals undergo a chemical reaction that involves the loss or gain of electrons it’s called oxidation or reduction respectively. A redox reaction is where both oxidation and reduction takes place.

In this blog post, we offer advice and guidance on how to control the redox potential, or ORP, in cooling systems.

First, let's look at an example of how a redox reaction can take place. For example, chlorine is an oxidising reagent and oxidises materials. But it itself is reduced, as shown in the formula: Cl2 +H2O + SO3= --> 2HCl + SO4=.

Here the chlorine gains two electrons: Cl2 + 2e- --> 2Cl- and is thus reduced, and the sulphite is oxidised to sulphate. (Sulphate has another oxygen, also an indicator of oxidation, but every oxygen contributes two electrons for bonding so when SO3= goes to SO4= the sulphur goes from an oxidation state of +6 to +8 – by “losing” two electrons – the true definition of oxidation).

Any specific half-reaction exhibits an electrical potential which can be measured and expressed in terms of a voltage where each species has its own intrinsic reduction potential. This is referenced against Hydrogen which is chosen to be “0”. 2H+ + 2e- --> H2 (0V).

The more positive the potential, the greater the species' affinity for electrons (opposite charges attract) and therefore their desire or tendency to be reduced and therefore (cause) something else to be oxidised. Because those electrons have to be ripped from somewhere.

Measuring the Redox Potential or “ORP”

Where solutions containing these chemicals exist, the overall electrode potential can be measured. Positive values indicate an overall oxidising environment, while negative values indicate reducing conditions. The value is a function of both the reaction and the quantity of reactant concentration. This measurement is called the “Redox Potential”, “ORP”, or “Eh”. It can be used to indicate the overall conditions and, to a degree, concentration – especially where we choose to add specific chemicals such as chlorine or bromine to bring about oxidation.

Biocides are an effective treatment to control fouling and microbiological growths in cooling towers. Biocides may include chlorine, bromine, chlorine dioxide, hydrogen peroxide, peracetic acid or ozone. All of these are oxidising biocides – and all exhibit a positive redox where the higher the value, the higher the concentration.

This seems simple. Add such a biocide and measure the ORP. Control to any chosen point, and the job is done.  However, the devil is in the details. The reality is that other physical chemistry factors and competing reactions must also be taken into account.

It is true that the Eh is unique to a reaction but chlorine and bromine, in particular, change their speciation depending on pH, and so they also change their redox potential.

This is a 40% difference with a ‘simple’ change of pH.

Chlorine and bromine are also very reactive towards ammonia or amine groupings, forming chloramine and bromamine compounds and – you guessed it – they all have different redox values again. So, although they do not show up as ‘Free Halogen’ by traditional chemical tests, when combined, they do impact the redox measurement.

Thus for the same concentration of added chemical, the redox will change with pH and the presence of contaminants.

Figure 1 below shows the oxidation reduction potentials (ORP) of solutions of varying free chlorine concentrations – but notice how the value changes with changes in pH. This clearly shows that as pH levels rise, for the same concentration of chlorine, the ORP value decreases.

For further clarity, I have superimposed the ionisation curve of HOCl (the dotted line) onto Figure 2, to show how they are all inter-related.

Figure 2 - Shows ORP for a given pH, strength of chlorine and indicating form 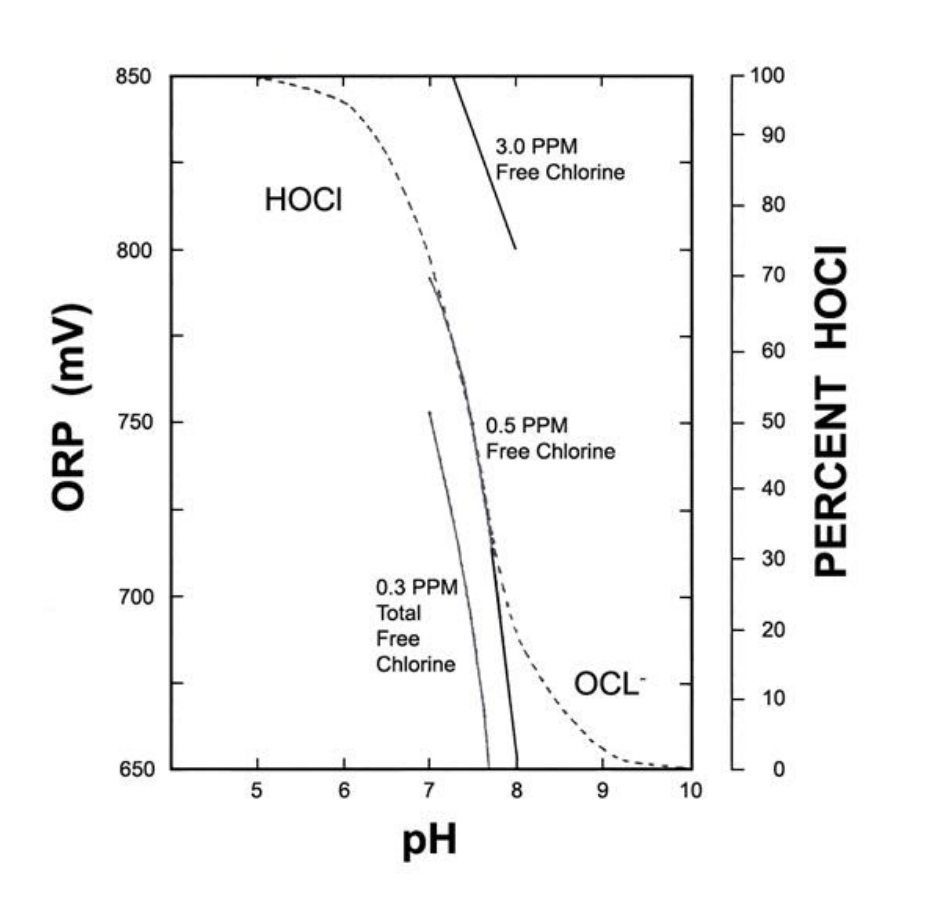 In a real system, chlorine is being added, usually as highly alkaline sodium hypochlorite. It is consumed by reacting with organics, bacteria and even bromide, such that the concentration will fall, and so too will the redox. The temperature is initially increasing, as the water goes around the system and, as the temperature rises, the rates of reaction increase and the redox rises.

So the ‘chlorine’ is also changing ionic form, as a function of that pH – and its redox. These reactions are further impacted by the consumption of the ions if entering into scaling or corrosion inhibition mechanisms, or by the addition of contaminants such as organics, -SH, -NH2 groups, or ammonia.

When the water is contacted by air, in the tower, volatile species are exchanged: oxygen increases, CO2 exchanges. the temperature falls, all the equilibria above shift again, and the redox settles at a new value.

Other redox reactions will interfere with the overall ORP of the system. For example rampant corrosion will reduce the ORP as Fe0 --> Fe3+ + 3e- while the cathodic inhibition reaction in alkaline pH’s of O2 + 2H2O + 4e- --> 4OH- will make it more negative under acid conditions, 2H+ + 2e- --> H2. Although the potential is 0V, it will alter the redox, to give a totally different value.

Apart from chemistry, problems are occasionally experienced with stray currents due to electrical interference, magnetic fields and unstable earthing, all giving anomalous readings on the meter. Finding such phenomena, especially in the field, can try the patience of a saint.

Redox Potential is a simple measurement of a complex situation in an aqueous environment, indicating the overall dominance of oxidising reactions or reducing ones.

In a cooling system, it usually indicates the effect of adding a known oxidising biocide and is used as a control feedback mechanism.

Typically maintaining ≥+650mV results in sufficient free halogen to control the microbiology. But this depends on many factors, including pH and species present, as discussed here, and should only be built into any contract with extreme care.

Occasionally, redox does not respond as expected or required. This can be for a number of reasons which, in the field, can take considerable effort to rectify and is not always cost-effective.

For more information, please get in touch with our our technical team. 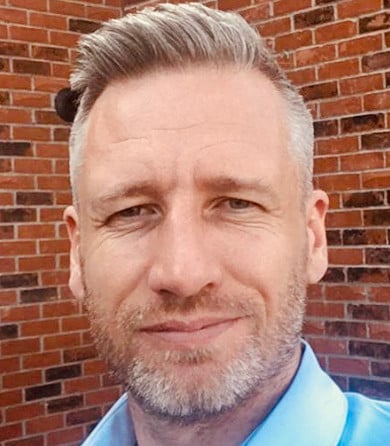