Bacteria and biofilm development in open and closed water systems

A biofilm will begin to form when free swimming micro-organisms attach to an appropriate surface and produce extracellular polysaccharides. The development of a biofilm can happen on a wide variety of surfaces including inner pipe surfaces, tooth enamel, or even internal medical devices.

In the realm of water treatment, it is generally accepted that if bacterial numbers are maintained below 10,000 cfu/ml, that the likelihood of any significant biofilm developing is remote. This level is therefore accepted as an upper acceptable level when monitoring is carried out in closed systems or cooling towers. Above 10,000 cfu/ml, it is recommended that biocide dosing is revised or increased.

The problems associated with biofilm development within an open cooling or closed system can be summarised as follows:

Persistent microbiological problems can occur within systems as the biofilm layers protect the underlying bacteria from the action of any biocides. When the biocide becomes depleted the system will become re-contaminated from the bacteria in the biofilm.

Corrosion will occur underneath a biofilm purely because the layer of biofilm will prevent the corrosion inhibitor from working as there will be no contact with the metal surface.

Certain bacteria including sulphate-reducing bacteria (SRB) produce hydrogen sulphide as one of the end products of their metabolism. This can be converted into sulphuric acid by sulphide oxidising bacteria. The production of sulphuric acid by these bacteria will cause corrosion of metal surfaces. Sulphur oxidation involves the oxidation of reduced sulphur compounds (such as sulphide H2S), inorganic sulphur and thiosulphate to form sulphuric acid (H2SO4).

SRB’s also corrode iron by direct utilisation of the metal itself. This occurs via direct electron uptake. Such electrical microbially influenced corrosion (EMIC) is assumed to be widespread and of considerable technical relevance.

Microbiologically-induced corrosion (MIC) underneath the biofilm leads to localised corrosion and pitting. It is estimated that 20% corrosion in all fluid transfer piping and systems is MIC.

As can be seen from the graph below, biofilm is the second greatest insulator after silicate scale. Biofilm has four-times greater insulating power than Calcium Carbonate scale of equal thickness, and therefore increased energy use. 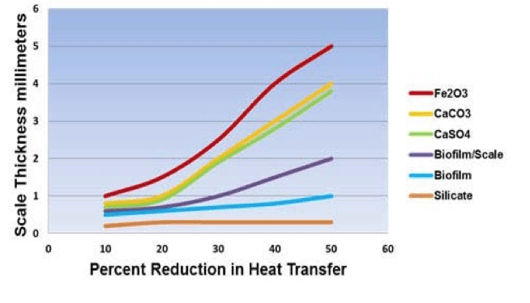 Legionella bacteria preferentially grow under layers of biofilm. The reason for this is that Legionella bacteria are microaerophilic - they will only grow in sub-atmospheric levels of oxygen i.e. they need a certain level of oxygen to grow, but this level needs to be less than the 21% of oxygen in the earth’s atmosphere. The prevention of the development of a biofilm layer therefore plays a major part in the control of the growth of Legionella bacteria in open cooling systems.

It is easier to maintain microbiological control in a system than to remove biofilms from systems. There are a number of chemical products on our range which have been specifically formulated for use in closed and open cooling systems to aid in biofilm removal. For technical advice please contact us on 01327 709 439.