Water is used widely as a cooling medium in processes for many industries and public buildings. The use of a cooling tower or evaporative condenser is still the most effective method of removing heat from water used in a process. Inhibitors are used to prevent the build-up of scale and corrosion so the system can work effectively.

Back to basics; how do cooling towers work?

The heat is transferred from hot process fluids into the cooling water through a heat exchange surface; consequently, the cooling water heats up. The evaporation of a small percentage of this cooling causes the concentration of salts in the make up, then reduces the temperature of the cooling water, allowing it to be used for cooling again. Make-up water is used to replace the evaporated water.

Evaporative condensers are often used to cool closed systems whereby pipework containing hot process fluids is sprayed with water to remove heat from the system. The primary objectives in the design, operation and effective treatment of cooling water systems include improving efficiency in heat transfer, minimisation of energy and water usage, and safe, reliable operation.

When operating a cooling system, there are several considerations to ensure the achievement of these objectives, which include the control of scale, corrosion, fouling, and microbiological contamination.

Scale is caused by the formation of insoluble calcium and magnesium salts and appears as a rock like coating. If scale can form in heat exchangers and cooling tower packing, it will lead to a reduction in heat transfer and cooling capacity, as well as acting as a breeding ground for bacteria. As water is lost through evaporation, the concentration of dissolved salts and general airborne dust and debris within the system will increase.

If the system concentration can be limited to keep the hardness salts in solution, scale formation will not occur. In areas of the country where water hardness is high, it is necessary to use a water softener prior to use, to minimise the likelihood of scale build-up and to optimise water use within the system.

Unfortunately, the removal of hardness from the make-up water increases the corrosiveness of the water. There is a fine balance, in the chemical treatment of a cooling tower, to ensure that optimal scale and corrosion protection is achieved.

In many cases, scale inhibitor chemicals will be used which make the calcium/magnesium salts soluble, therefore preventing scale formation. The addition of acid (sulphuric) to lower the pH and alkalinity also reduces the potential for scale formation and is sometimes used as a means of scale control in larger cooling systems.

Corrosion is the result of a chemical interaction between a material and its environment. In a cooling system, it results in the loss of metal from a surface, which may be pitting, and is often associated with the formation of deposits.

A simple representation of the corrosion process, an electrochemical reaction, in a cooling system is: 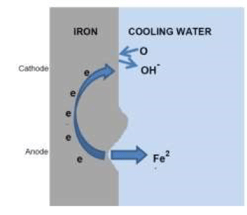 Corrosion is accelerated by high levels of dissolved oxygen, particularly in conjunction with low pH (low alkalinity) although excessive alkalinity can also be a factor. Temperature and the number of dissolved solids are also factors.

When dissimilar metals and alloys come into contact, an electrochemical reaction, known as ‘galvanic corrosion', may also take place. The more reactive metal or alloy is the one that will corrode. In the following pairs of metals/alloys commonly found in cooling systems, the first one of the pair will corrode:

The pH and conductivity of water within the system are factors that also affect the rate of galvanic corrosion. Corrosion may also occur because of a chloride attack on stainless steel and microbial activity (microbial corrosion). Unfortunately, the conditions which are optimum to reduce scale formation are those likely to favour corrosion.

Chemical corrosion inhibitors are available which generally act by forming a film and thereby protecting the anode and/or cathode.

The main types of corrosion inhibitors are:

General inhibitors (form a film on all surfaces):

B & V Chemicals have a range of scale and corrosion inhibitors to use in cooling towers. For further guidance about which ones are right for your system, our technical team are here to help. Get in touch here.